We only had one big night in Adelaide and were looking for the best place to go to truly get the Adelaide experience. We had asked around to see what people thought, and the response from almost everyone was 2KW Bar & Restaurant, serving up the best food with premium views of the city. We were sold!

The dress code was smart casual and from the moment we arrived at the front door, we could see why. Our booking was for later in the evening around 8:45pm, which meant we would start getting the late night crowd enjoying drinks for a night out on the town. Arriving, we were welcomed by a well dressed host with a small clipboard to tick our name off the list. He ushered us to the elevator and told us to head up to the 6th floor where we would need to change elevators and head up to the 8th floor. The elevator doors opened and we were welcomed into the rooftop dining space which was dark, sophisticated and very well decorated. We finally arrived at the restaurant, were quickly greeted and brought to our table. We were notified our table would be on a high top table which would be shared by another group, no issues here.

The space offers the main restaurant area, an outdoor bar and private booths for almost any occasion. The best part, their spectacular views of the city atop 2 King Street’s historic building. The fit out was very modern with exposed light fixtures, dark walls and ceilings, and floor to ceiling windows along one whole side of the venue to really take in that stunning view. The outside area offered comfy outdoor furniture, an additional bar, cabanas and gardens to really create a wow factor in the 550 square metre space. 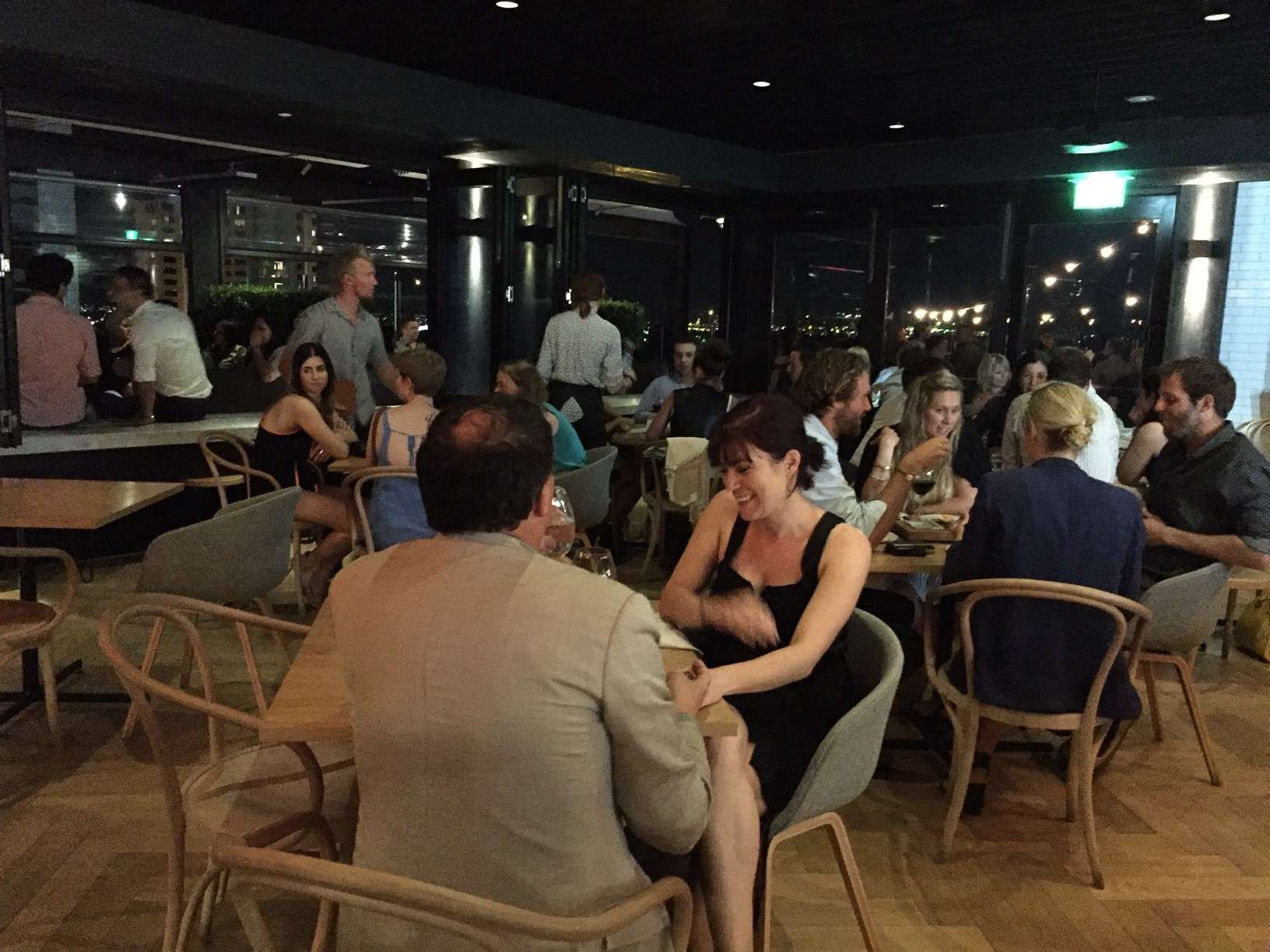 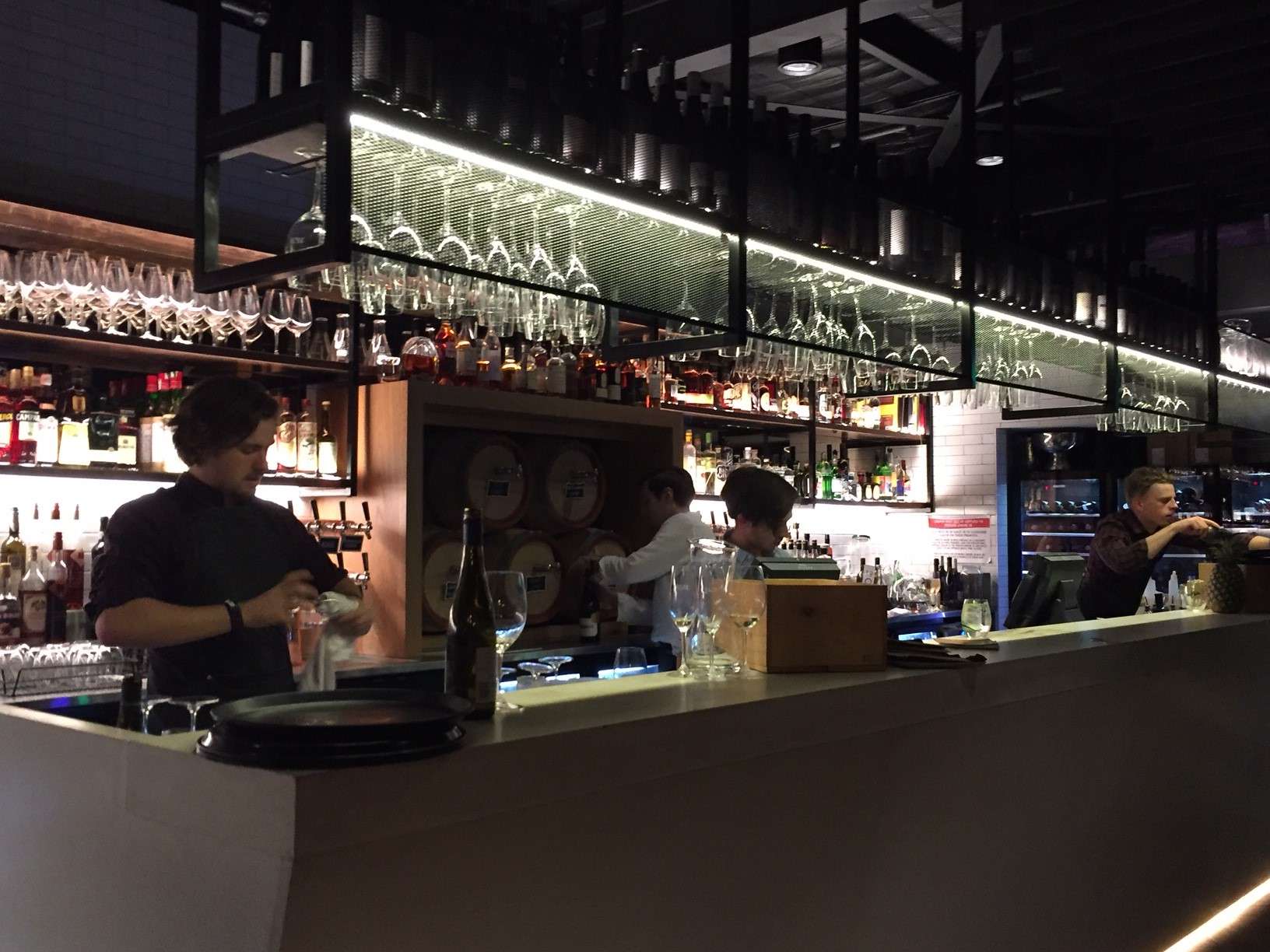 I was instantly impressed with the space, so couldn’t wait to start trying their amazing food! The service was friendly and attentive. Our waitress was very personable, and explained the menu in depth to ensure we tried all the right dishes.

We started the night with a dozen ‘Coffin Bay Oysters’. They were quite fresh, however not shucked very well. There were quite a few small pieces of the shell in most of the oysters. 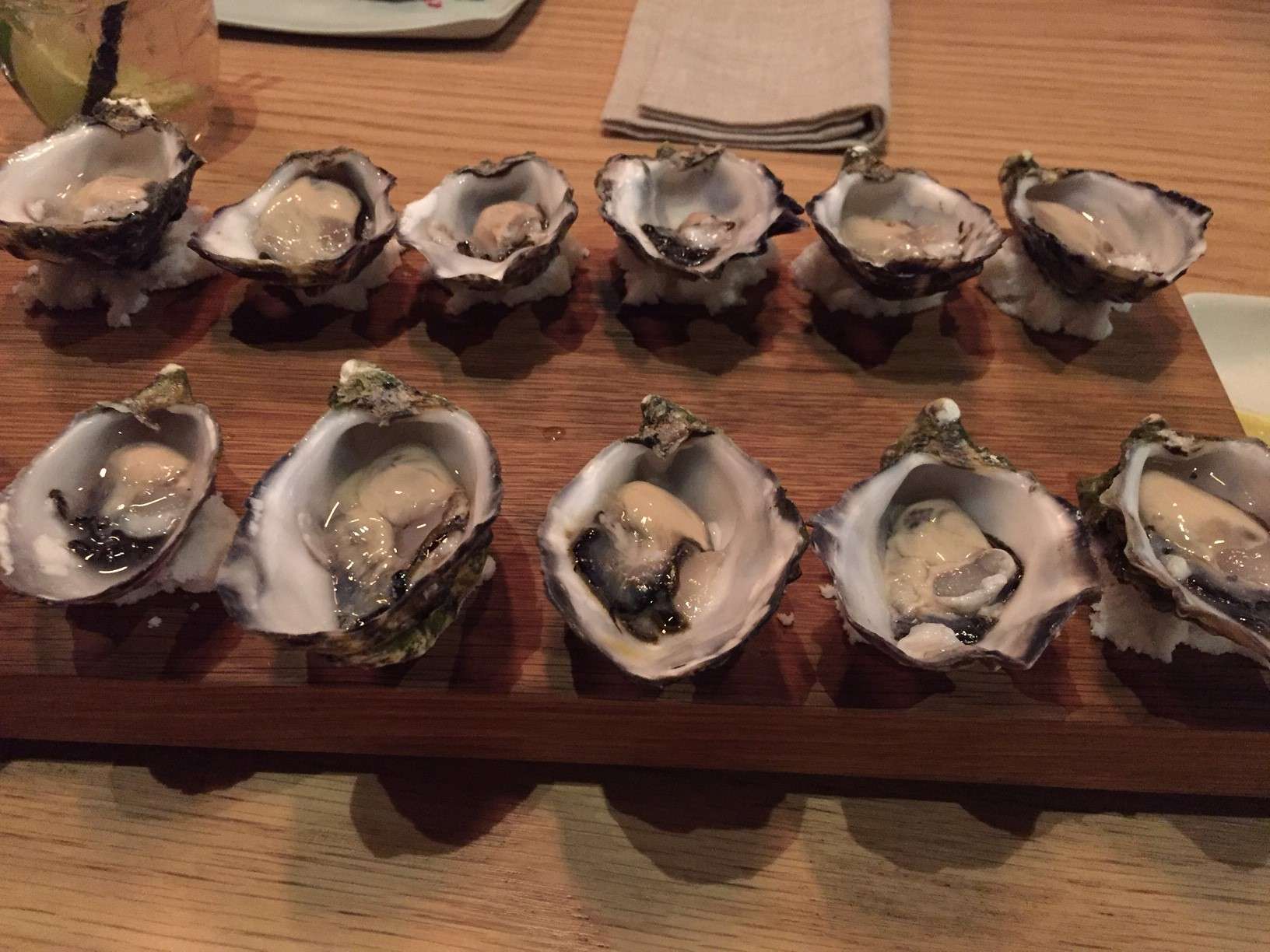 Since I personally do not like oysters, I ordered a few ‘Cheese Croquettes’ filled with spinach, kefalotyri sheep cheese, which sat on a beautiful beetroot and turnip pickled mixture. The filling was amazing and the crumbed outside was crunchy and well seasoned. 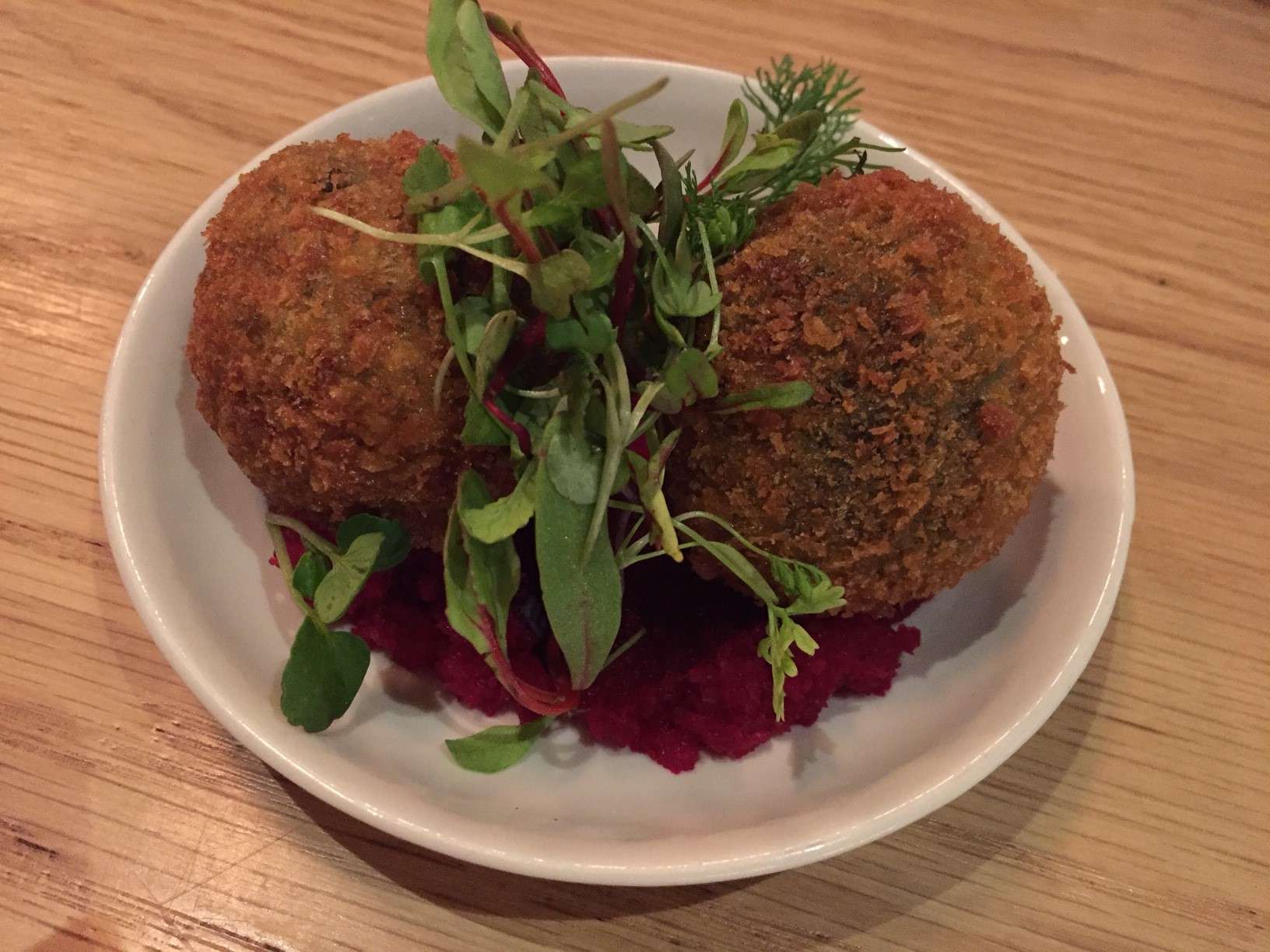 Next out was the ‘Vitello Tonnato’, which I was quite interested in trying. The dish consisted of veal, mojama, parmesan cream and caperberries. The texture of the veal is quite different from anything you would normally think of, however was quite mild in taste. The stand out flavours came from the tuna crisps, which eaten with the veal was impeccable. 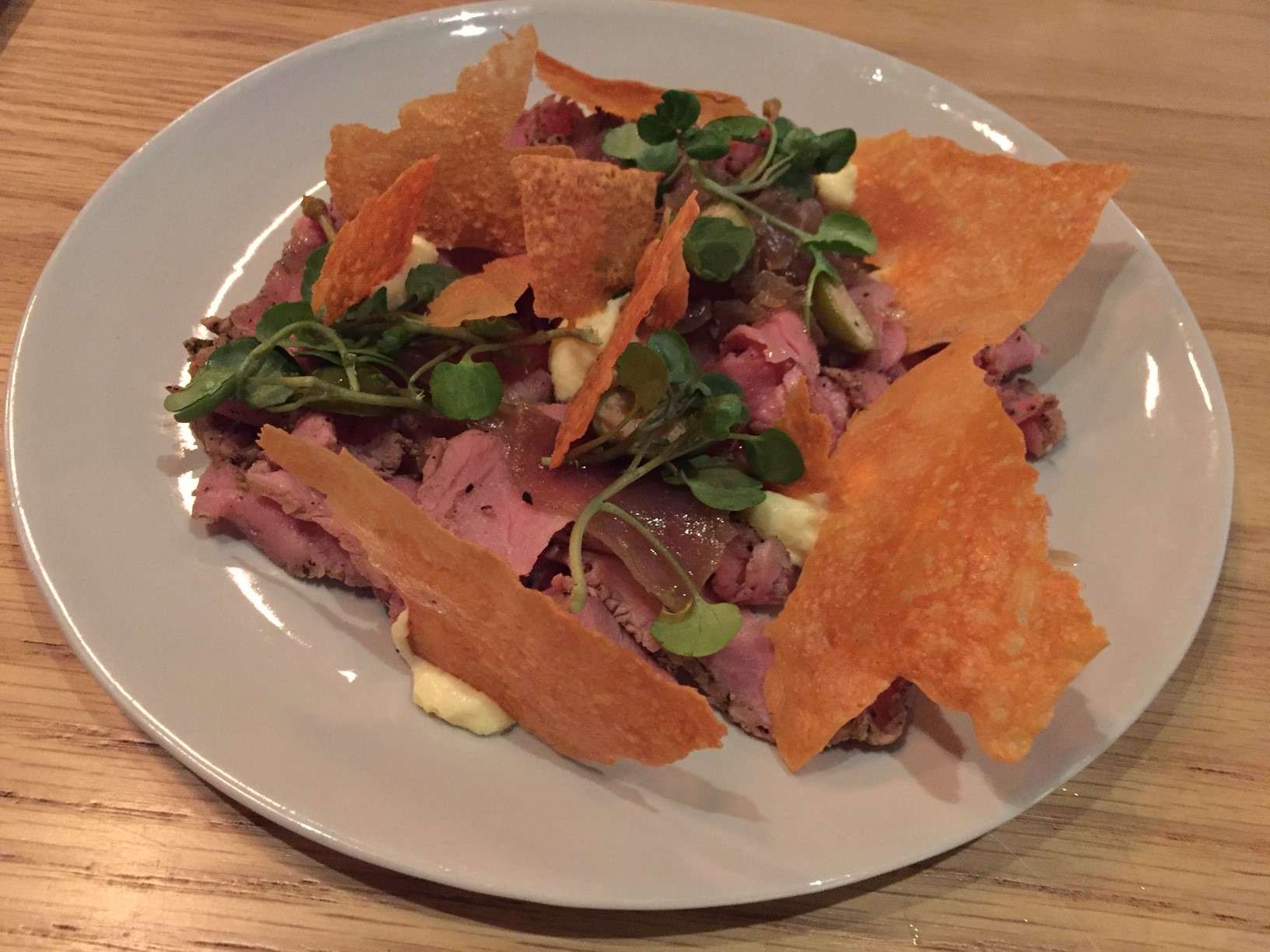 I’m always a sucker for tartare, so it’s no surprise we ordered the ‘Eye Fillet Tartare’ served with shallot, cornichons, parsley, olive soil, free range egg yolk and fries. Presentation was beautiful with the flavours to match. The yolk was the most yellow yolk I’ve seen, the tartare had a beautiful herb flavour and the thinly cut crostini & chips accompanied the tartare to perfection. 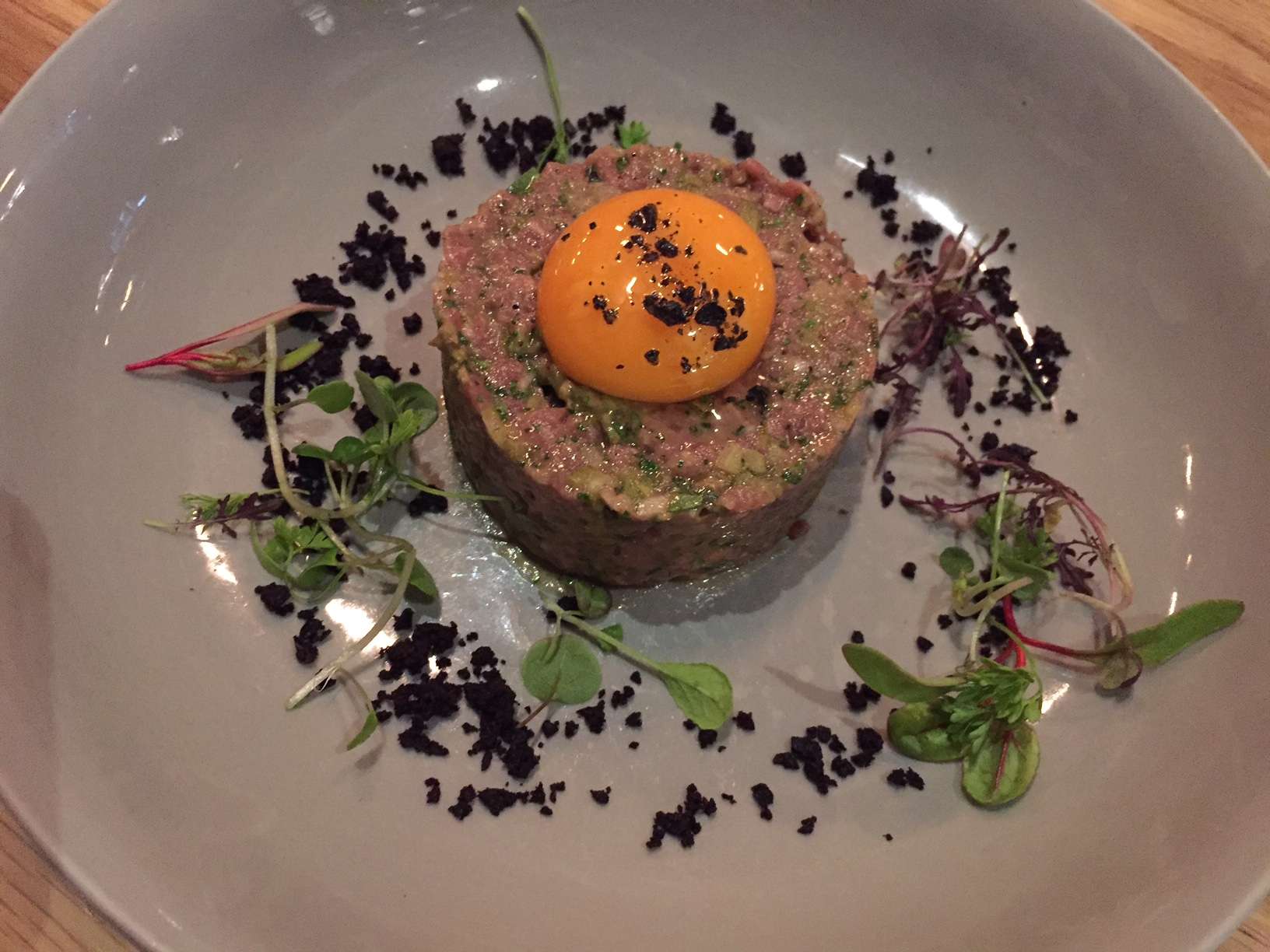 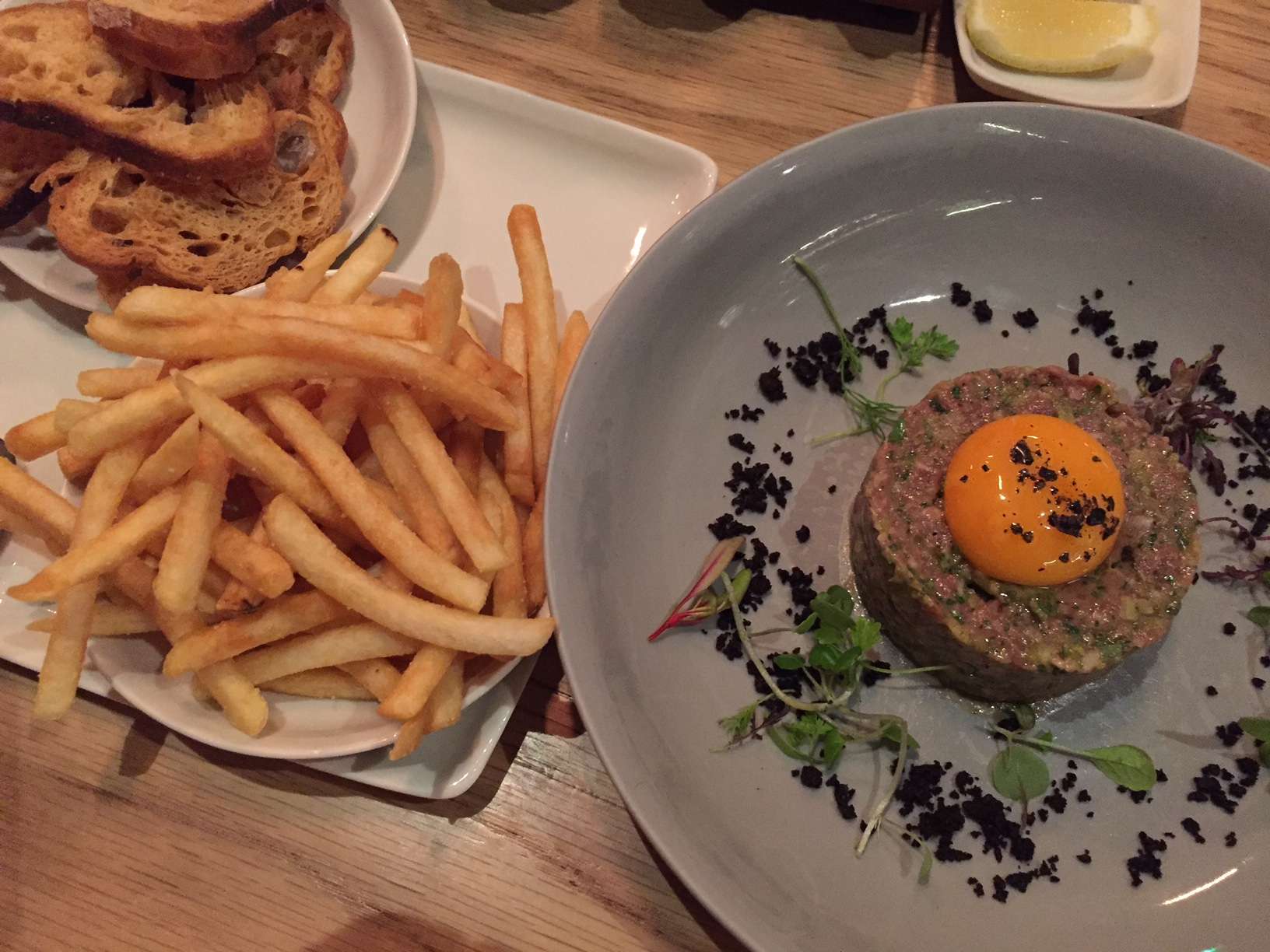 MC loves his octopus, so it was a must to order the ‘Slow Cooked Grilled Octopus’ served with confit kipfler potatoes, chorizo and romesco sauce. Again another stand out dish! Octopus is one of those dishes, where if not cooked properly, it’s a total fail. Here, it was done just right and the kipfler potatoes added a crunch, and to finish the chorizo was just the right amount of spice. 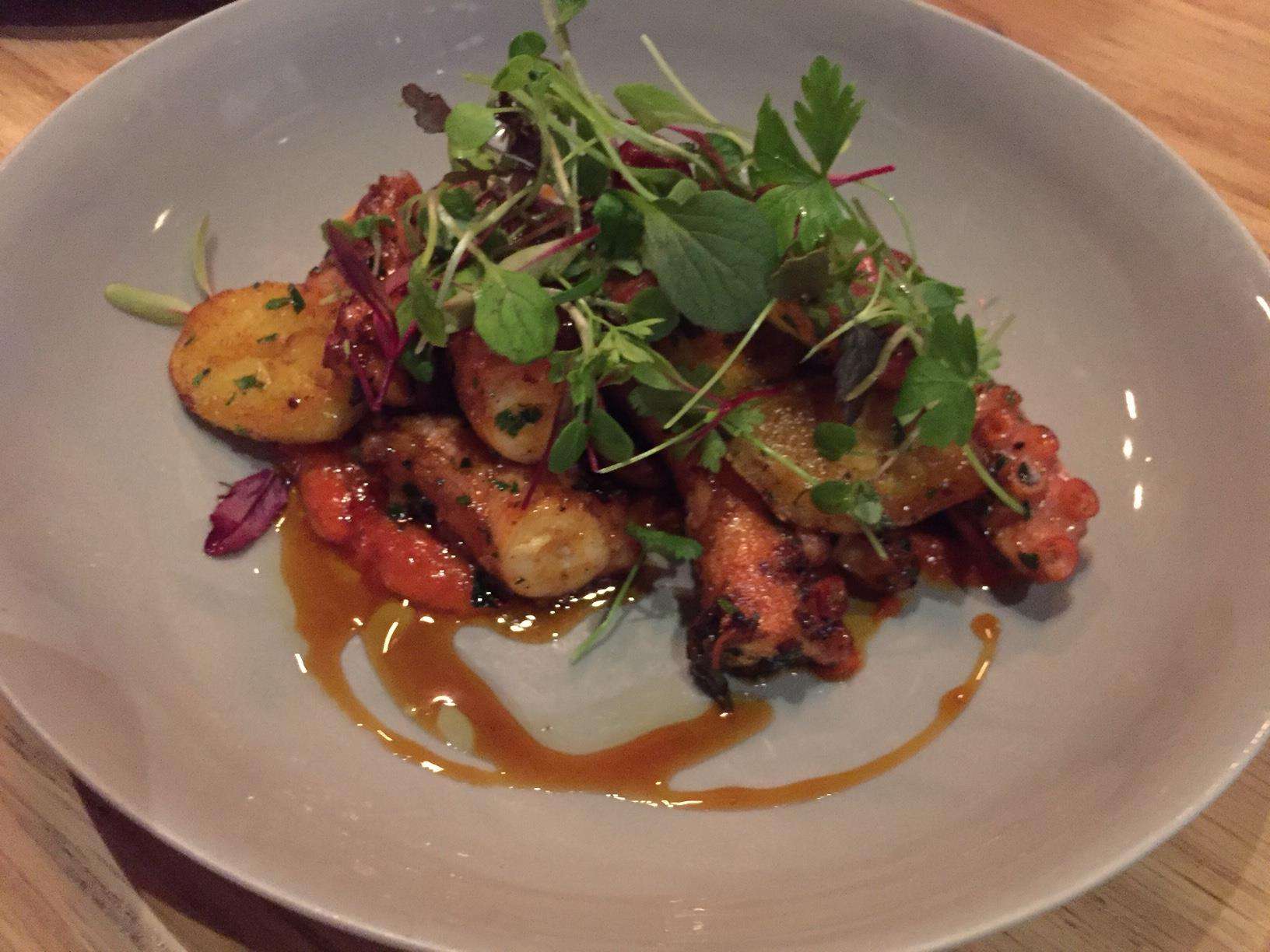 Our last entree to start was the ‘King Brown Mushrooms’ served with cauliflower, pickled garlic, Sherry dressing and olive shortbread. This came at the recommendation of our waitress, and she definitely did not disappoint. I love any and all mushrooms, so a full on mushroom dish just blew me away. 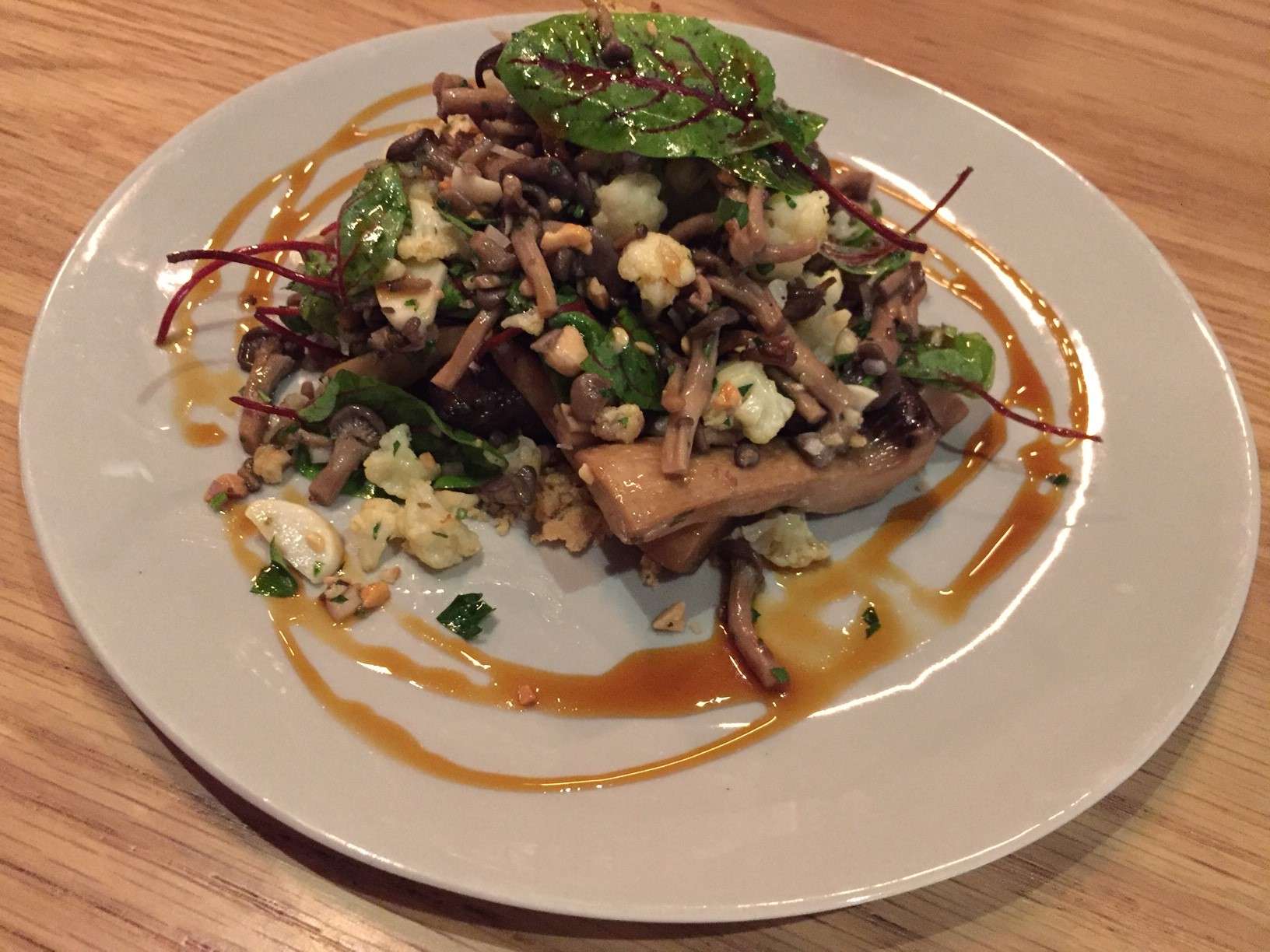 We started with the ‘Crispy Spiced Half Duck’ served with a carrot, snow pea tendrils and walnut salad, ginger and pomegranate sauce with cos lettuce cups. Our waitress had said it should be eaten like peking duck, and to wrap the lettuce around the duck and salad. I wasn’t a fan of the salad, and found eating them separately was much better. The duck was cooked to perfect, well spiced and quite flavourful. It seemed like a rather small 1/2 duck portion, however we had ordered so much I don’t think anyone would have noticed. 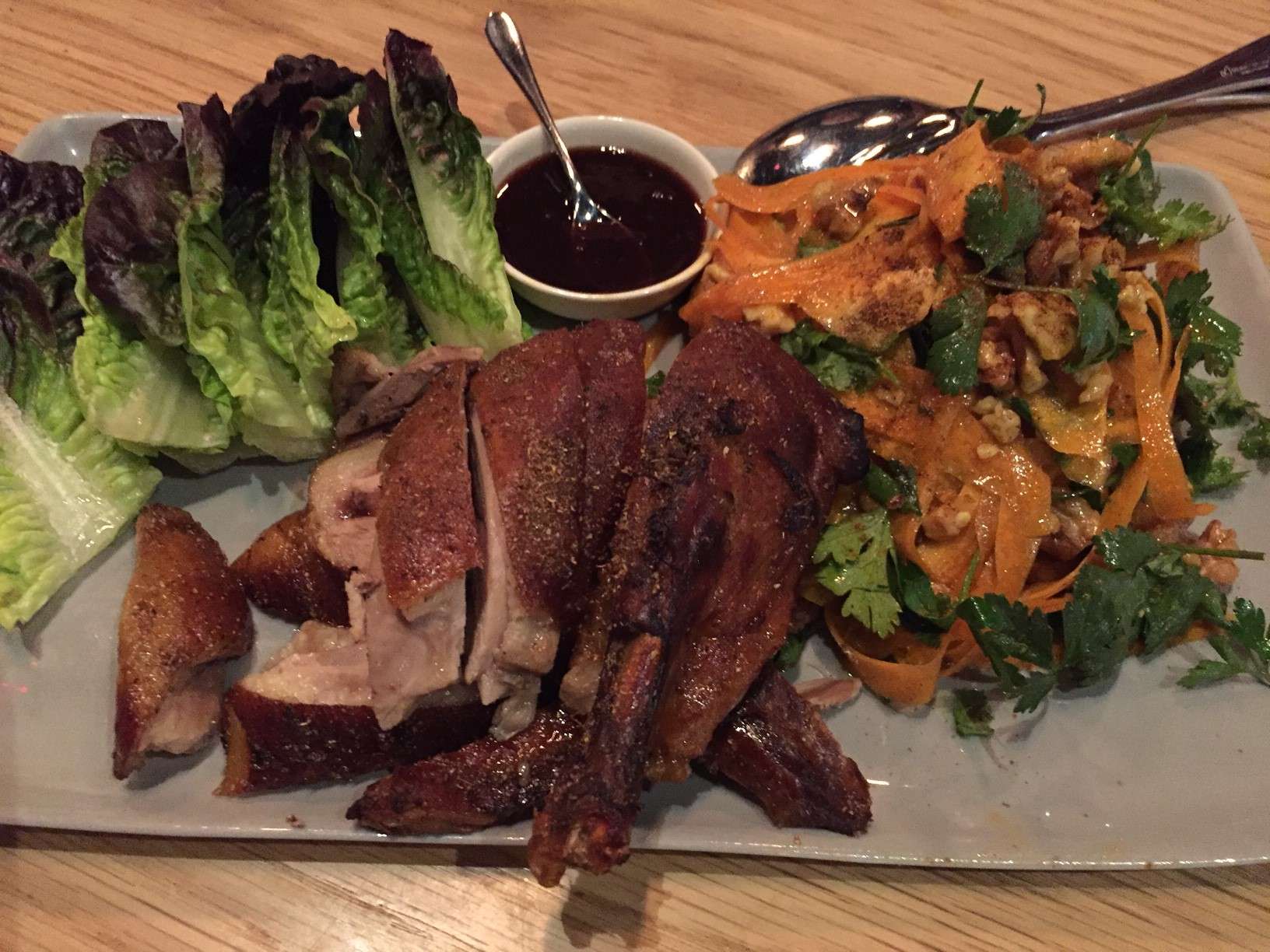 Our second main, again recommended by our waitress was the ‘Kangaroo Shank Tagine’ served with dried fig, prunes, roast pumpkin, honey onions and cous cous. It was more sweet than I was expecting, however was absolutely to die for! The figs, prunes and honey onions were definitely noted in the sweetness, contrasting the kangaroo flavour. 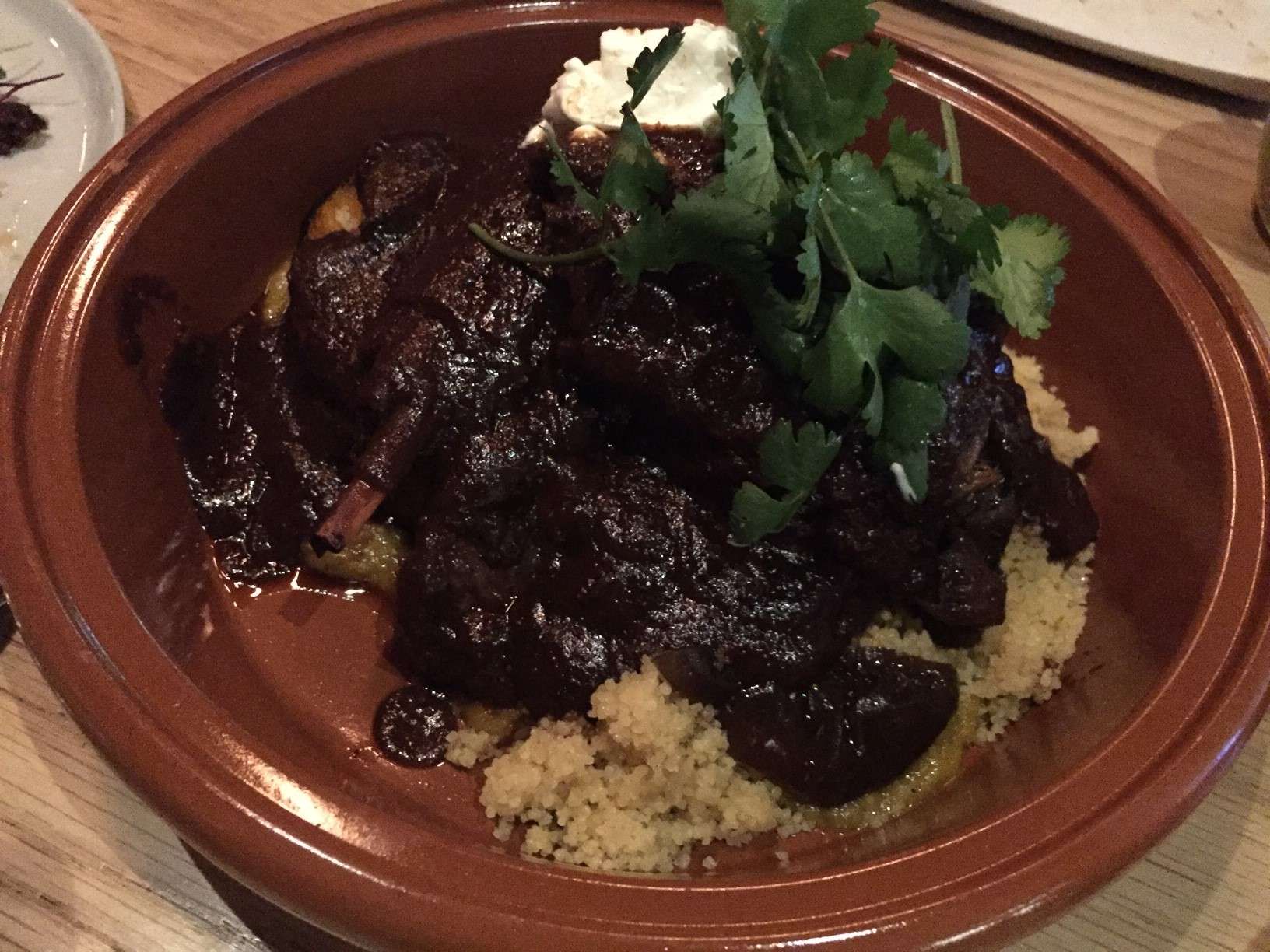 The final dish of the night was the ‘300gm Rangers Valley Scotch Fillet’ served with bravas potatoes, pan fried black pudding and fried duck egg. Again another perfect dish and a fabulous way to end out night. We had ordered the steak medium rare, which came out a bit more rare than our liking, however still fantastic. The potatoes were incredible, crunchy on the outside and piping hot and fluffy on the inside. Overall, we were so glad we were recommended to come here. The food, atmosphere and service were all flawless and just what we needed. The pricing is a bit on the pricey side, however with a $4.5 million investment to develop the space, it was well worth every dollar spent.